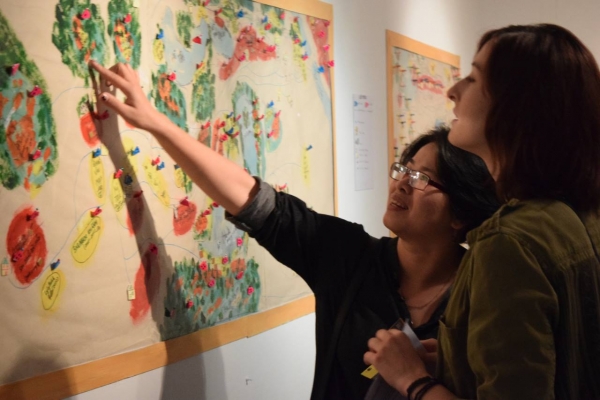 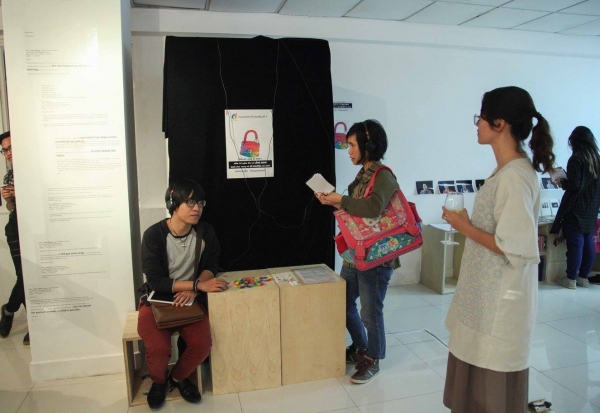 Since 2009, Nhung Ding has been meeting and listening to stories of queer folks living in Hanoi. Ding started noticing a pattern in places mentioned by people when they talked about dating and hanging out, and started thinking about marks in memory maps which are both personal and communal for queer people, especially older generations, living in Hanoi. Ding then started creating maps from these stories and hopes to create connections and expand love towards the city through shared history.

“Vùng an toàn rộng mở – Shelter of LGBTQ” initiated by Vu Kieu Oanh and Group 6+ is collecting stories waiting to be heard from members of the LGBTQ community who have suffered abuse and encountered prejudice in the past but still respect and love themselves.

The stories are presented as audio files and Oanh has built a “safe shelter” which resembles a public booth where members of the audience can recount and record their own stories. The shelter is covered with soundproof foam and is equipped with a sound recorder. There is no need to give your name or personal details, but stories are made available for the public to hear. By inviting everyone to participate and share their experiences, opinions, and wishes, Oanh and Group 6+ hope to expand the safe LGBTQ universe.

Nhung Ding graduated at Clark University in 2013 with a master's degree in International Development for Social Changes. Dinh is one of the main curators and organizers for the unstraight exhibition in Vietnam named The Cabinet (Hanoi, March, 2015), Love, Pain and History (Saigon, April 2011). In 2015, Nhung was a consultant on several projects including collecting stories and making an online queer archive in Vietnam, as well as unstraight exhibitions and archive projects in Cambodia, Serbia, and Russia. Currently, she leads a Vagina Talks project and is working on the Vietnamese queer lexicon.

Oanh Kieu is based in Hanoi and interested in the LGBT community, sexual health, and Mother Goddess religion. In 2012, she made a 2000+ km cycling trip across Vietnam to bring a message of support for LGBT community. She is a founding member 6+, an independent organization that connects the LGBT community and supports their health. She holds meetings to share knowledge about sexual diversity at universities and organizations. She also provides psychological counseling for LGBT people and PFLAG. She is a mentor in programs that develop leadership capacity for LGBT youth. She has been a core member of the organizing committee for VietPride, the largest pride festival for the LGBT community in Vietnam, since 2013.