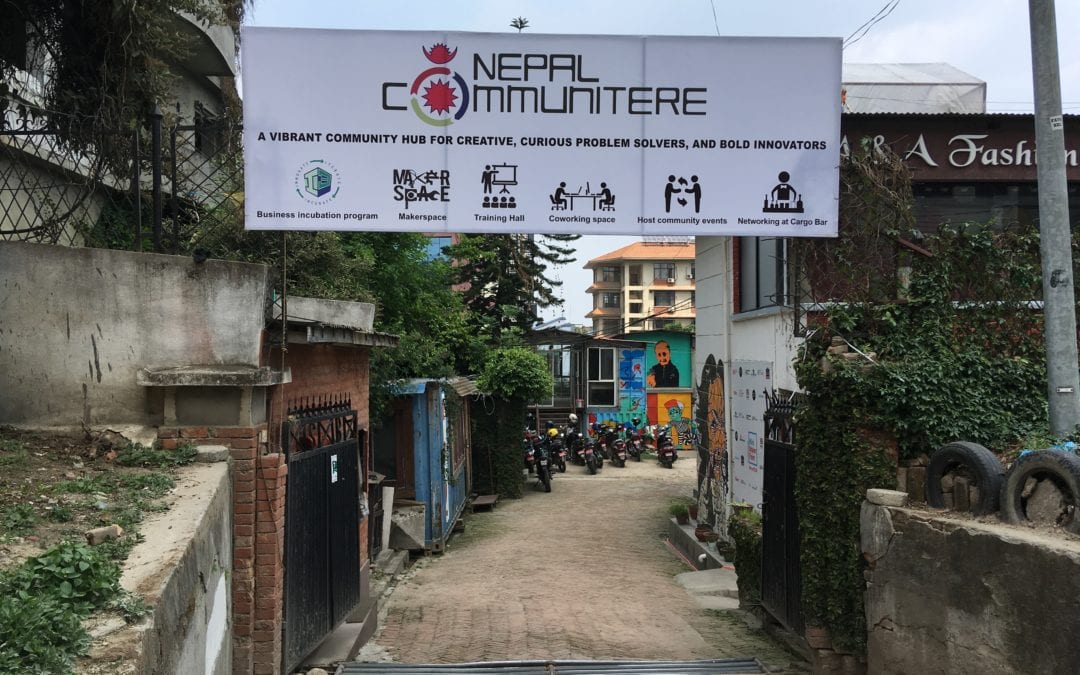 I awoke my first morning to the sound of bells ringing and birds singing. Somehow, my driver had found my little apartment the night before, though this part of Kathmandu, Old Patan, is so ancient that it has no street signs, no street names, and there are no numbers for houses. Places here are referenced by family names or the nearest temples. Streets were developed as footpaths, and only a few are wide enough for a single car to pass through. Dhumbahal House is where I lived, named after the nearest Hindu temple, though there is a Buddhist Stupa outside my kitchen balcony and a Hindu shrine below my living room. They are visited continuously, both day and night.

By day three I’d recovered my lost luggage, met with the Embassy, and walked the mile through the old city to Nepal Communitere: an innovation hub, entrepreneurship incubator, and makerspace that supports a progressive vision for Kathmandu and greater Nepal. The team at NC is a vibrant community of Nepali people, many of whom have spent time in the U.S. or Britain, and I felt at home almost immediately with the delicious snacks and lively conversations.

For my residency, I taught a digital fabrication workshop to 16 people, aged 18 to 34, on the topic of women’s empowerment. All of the participants had laptops, some were practicing artists and others were from leadership roles in their work and community, and very few had digital design experience.

l led each day of the workshop in roundtable discussions with the question: “What does empowerment mean to you?” Some stories were difficult, others inspiring, and I deliberately (and transparently) fostered a safe and inclusive space so the participants and I could co-create a supportive community together. Though everyone had different perspectives, the consensus was that women want more choice when it comes to their bodies, access to education and employment, and who they form intimate relationships with and why. Each day ended with an introduction to 2D and 3D design software and tools to fabricate the components to make art.

Four teams emerged around themes within women’s empowerment: home, career, culture, and personal. When it was time for teams to start planning their projects, my workshop assistant and I tasked teams with describing how a visitor would explain their project to a friend, and to create the work starting with that description. Then we set to enhancing the artistic skills that participants brought with them by adding skills in digital design and fabrication.

In the photo above, the participants and I are visiting a digital foundry to see CNC machines, laser cutters, and vinyl sign making machines.

We had ten days to develop prototypes that would invite the public to add to the conversation around what it means to be empowered for women in Nepal.

There was such exuberant energy from participants that came from the project development! All around me, women were speaking their minds, supporting one another, and the feeling was contagious as others in entrepreneurship and artistic communities starting dropping in to see the work and telling others.

What surprised me most was that these projects were able to extend the safe and inclusive community we’d created so that visitors were now participating in the conversation we’d started during the workshop. Each team developed a project that was participatory in nature. Spectators became participants when the projects were unveiled at the Open House, and it seemed like all of Kathmandu was buzzing with the conversation about women’s empowerment.