In March, I had both my first scouting trip for the Arts Incubator as well as my first experience ever with life, culture, and nature in the Philippines, and more specifically, in Dumaguete. As an outsider, I wanted to collect my initial impressions of this fascinating place that soon would be my home. As I venture into the intense experiences living and working in Dumaguete, it is my goal to use these first observations to help process the experience and understand how my own ways of seeing this place will shift and evolve. Sharing these impressions also can help those with whom I will be working and living get an idea of how I am experiencing their world and how that’s different from my experiences in other places. Then they’ll be able to share contrasting points or different opinions. This post also will reveal how much of a noob I am about Filipino culture and how much more I have to learn!

Of course my initial impressions are generalizations, and there are counter-examples to all of these.

Everyone is super nice 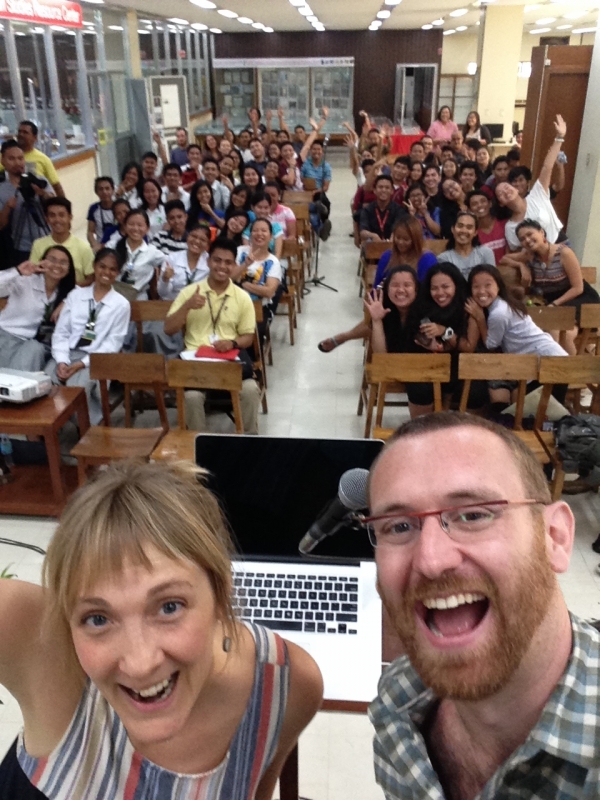 Kate Spacek and Andy Quitmeyer kick off the incubator at Silliman University. Photo by Andrew Quitmeyer.

This is a positive stereotype that really rang true. Everywhere I went, Filipinos constantly went out of their way to help me; from the Tokyo-Manila flight attendant giving us a ride to our hotel, to folks walking with me for blocks to show me where to purchase a used bicycle. While walking around in public areas, I did not seem to be put into the “outsider” box, but rather was welcomed. I felt more accepted than other foreign places I have visited.

The town has an unending sea of motorized tricycles flooding its streets. They are loud, smelly, and make walking through town difficult. Moving through the town chokes you with exhaust and deafens you to anything but the busy city. That being said, a 10-minute walk to the edge of town brings you to some of the most beautiful areas I have ever encountered. The city ends abruptly, the trikes quiet, and the fresh air moves in under a clear, starry sky.  With the city growing, and major concerns like the energy plant’s developments on Mt. Talinis, though, the peaceful and beautiful parts of this region appear to be losing the battle. 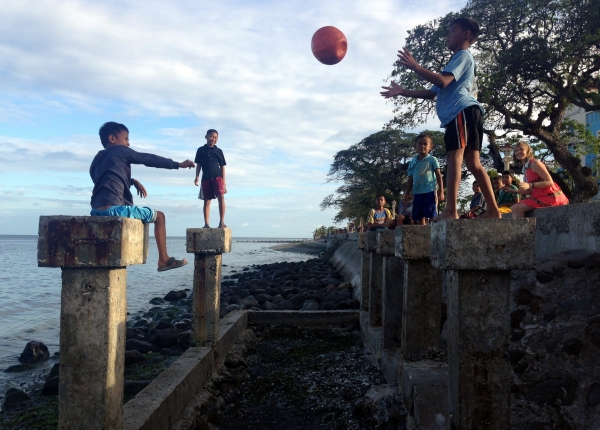 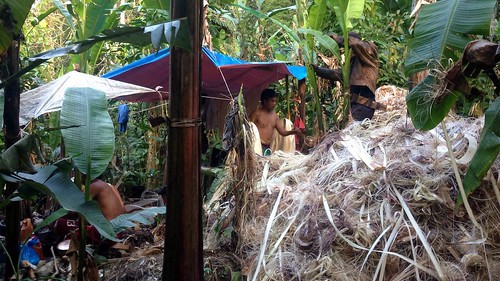 I just have no idea what lots of things are

Like this thing… It was beautiful! This whole part of the ocean filled with flags blowing in the wind.

Everyone is super enthusiastic and itching to do something fun

During our initial visits with different groups of artists, activists, engineers, and students, we were blown away by everyone’s enthusiasm. Person after person came up to me, spouting all kinds of different ideas that interested them. While I have run many different workshops, the participants here had a different attitude than I have experienced. I would say that one of my roles during a typical workshop in the US is to try to take in a bunch of wild and crazy ideas from a group and help them realize these thoughts with technical skills. In Dumaguete, I almost faced the opposite. The people I met represented a vast wealth of technical, social, and artistic skills. They were sophisticated architects, activity organizers, or meticulous artists. Their questions to me instead were about how to turn these valuable skills into something fun. More than one person asked me “Can you teach me how to be creative?” This is a question I have never been confronted with, and it will pose an interesting challenge for me! 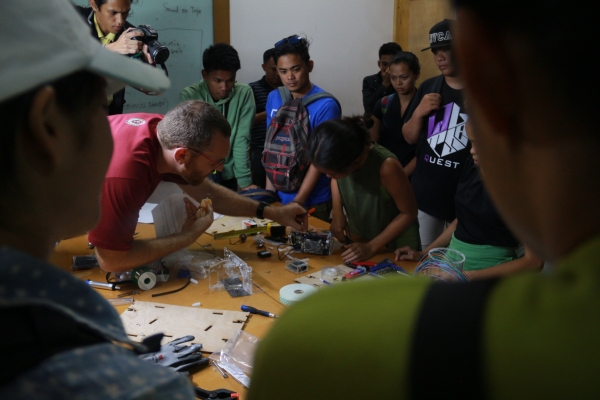 There is way too much sugar

I’m a person with a major sweet tooth. In the US, I go nuts for candy and often finish huge bags of M&M’s before the trailers even finish at a movie theater. Everyone had told me that the Philippines had a big issue with sugar infiltrating all food, but I had not expected what I encountered. Fried and sugared food is ubiquitous in an almost depressing way. For a person who usually craves sugar intensely, I was so inundated with it that I began craving vegetables and leaves! My favorite food became a salad of bland, boiled ferns. The entire town feels like a food desert with only heavily processed cheap “fast food” available. Some folks seem to react to this by aggressively only going for certain types of healthy foods, but most seem accustomed to this style of food. I remember when I tried ordering snacks for a group meetup… I wanted to purchase the most “authentic” pizza I could find, but nobody was happy; apparently the pizza was “too bitter, not sweet enough.” 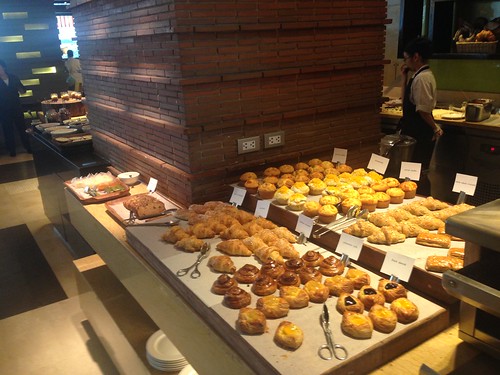 It’s the most diverse mix of cultures I have encountered

Owing to it’s fragmented island nature and waves of imperialism, the Philippines is hands-down the most interesting mash-up of cultures I have been lucky enough to experience. Just in the language, there’s a seemless flow between bits of indigenous cultures, nearby islands, Spanish, and English. People’s names were one of the biggest displays of this hyper cultural diversity for me. For instance I met amazing folks with names spanning from the super familiar to the incredibly foreign to me. Some examples include names like Mark, Henry, Dan, Humphrey, Zorich, Fry, Apple, Ying, Ritchley, Prexyl, Zing, and Irish (as she introduced herself, “My name is Irish, but i’m actually Flipino).  It’s an awesome blend of cool names and cool people! 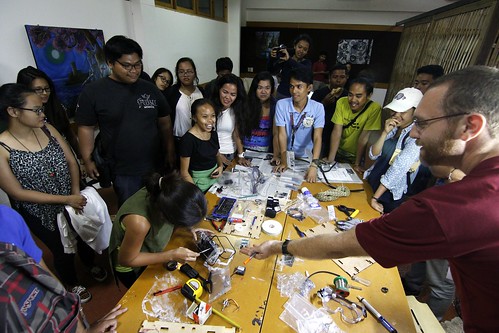 A mix of students at Foundation University. Photo by Andrew Quitmeyer.

Everyone calls me “Sir Andy.” I’ve never had this honorific before, but it’s pretty fun! I recently earned my PhD, so it’s been fun getting the occasional “Dr. Andy,” but “Sir Andy” is way cooler! 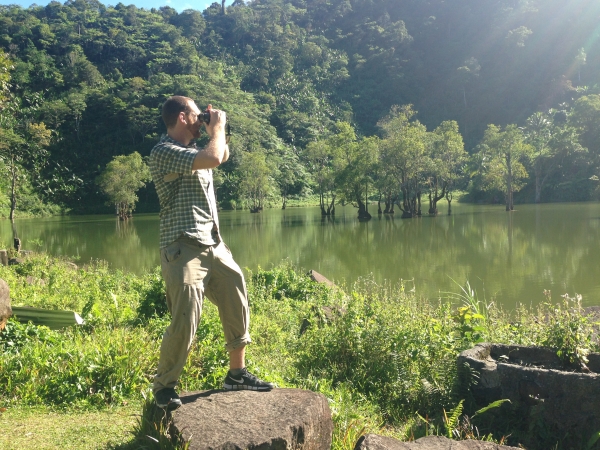