I arrived in Laos with three rules for myself; stay open, ask questions, and listen.

Once people started talking, the same issue kept coming up: the accumulation of trash around the city. Laos is a developing country that is in the throes of robust economic and urban development. The growth in and around the city is outpacing the existing infrastructure to manage the amount of waste being produced on a daily basis.

The city produces at least 637 tons of waste per day on average. Only 250 tons of waste is recycled or taken to landfill, according to the United Nations Environment Programme. This leaves almost 400 tons of waste per day that either ends up being burned or tossed in the streets, canals and rivers. Mass amounts of plastic only started being used in Laos about twenty years ago, so it is a relatively new product in terms of widespread use. Traditionally, food items were wrapped in banana leaves and other organic materials. These items could be thrown on the ground and they would decompose or used in fires without any environmental consequences. Today, the banana leaves have been replaced by plastic bags and bottles; they are discarded without regard to where they will end up, and burnt without considering the impact of the air. That toxic scent of melting plastic is common around the city. 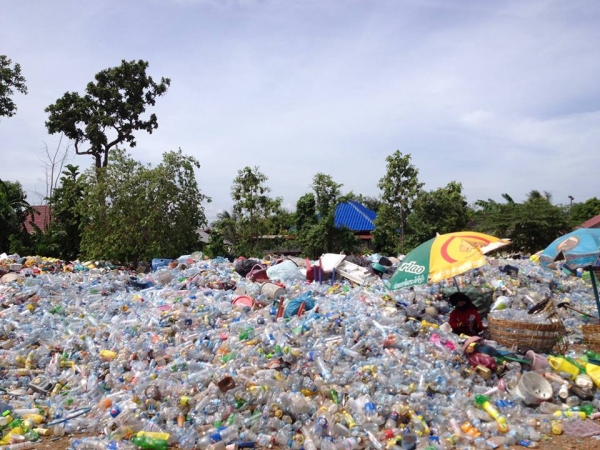 There are trash collectors who push wooden or metal carts around the city, collect plastic and other recyclables, and bring them to a local recycling center in exchange for money. The price for plastic, however, is directly impacted by the price of oil. In the US, we celebrate when gas prices drop. In Laos when the price of oil drops, the demand for recycled plastic also drops because it is just as cheap to purchase new plastic. The trash collectors end up receiving less money for the plastic that they collect and have less incentive to gather it.

The work ahead of us all — as artists, students, teachers and youths — presents a grand responsibility and vital opportunity to use public arts as a way to help influence public practices regarding environmental health. As we continue the collaborative process of mural-making to educate neighborhoods about practices like recycling, each community can work together to build a better environment for the future.