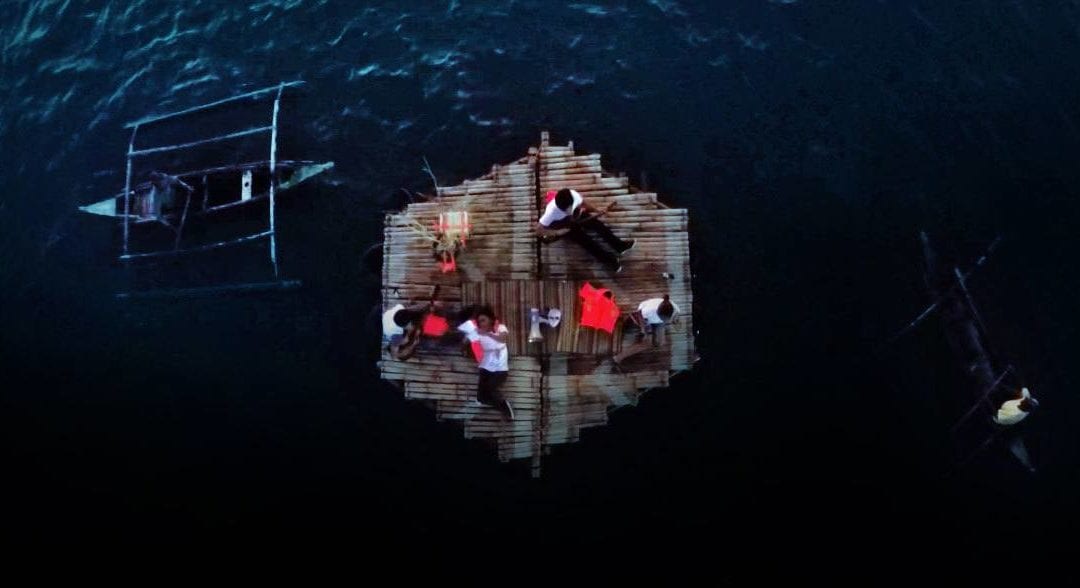 Today is my last day in the Philippines. A few hours ago I landed in Manila, after waiting for over an hour while the Presidential airplane was landing at the Bacolod airport. I was already installed in my airplane seat, all buckled-up, and through the tiny I could see government officials being received with all the appropriate gallantry. I was feeling quite lucky to have such a great viewpoint just a few meters away from the action, even though I had four other passengers trying to somehow place their phones right under my nose, which apparently was the best spot for taking pictures…

After all the anticipation, President Benigno Noynoy Aquino III was descending from his airplane and everyone around -even inside my airplane- suddenly stood up while a small marching band played quietly the national anthem in the background. This moment was perhaps the best closure for my time in Bacolod, also the moment when I finally understood something essential about Filipino culture: This is a place bound together by very strong community values. A strong sense of togetherness, a shared identity, and most importantly, an admirable resilience to an adverse history (colonialism, natural disasters, inequality) rule this country. I couldn’t be luckier for the opportunity to work in such an energizing context like Bacolod City, where art and community engagement come hand-in-hand. 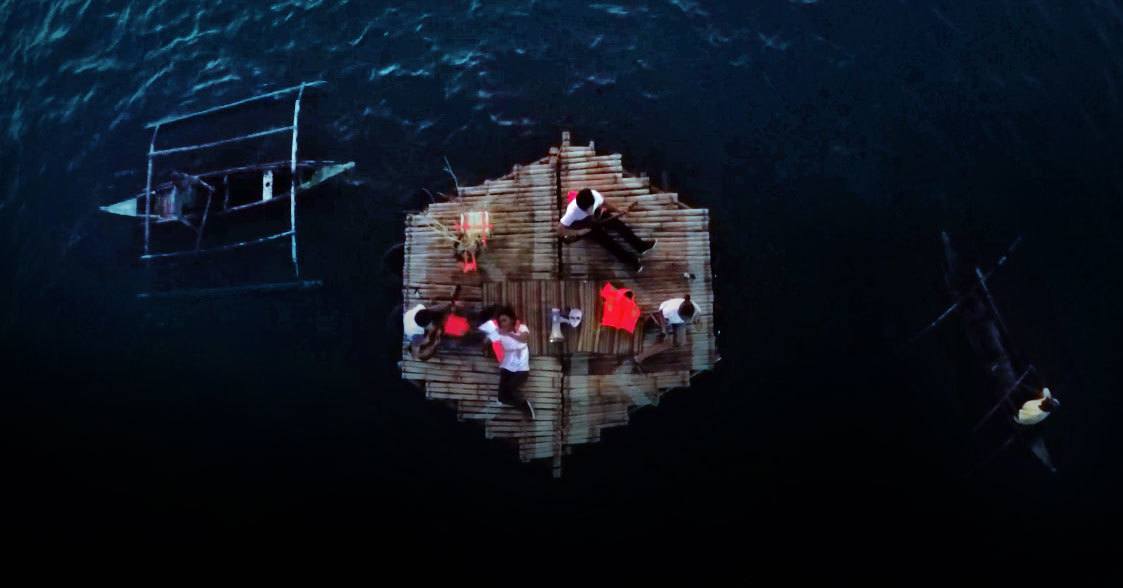 Shortly after I landed in Manila, I had a three-hour taxi ride through the city’s heavy traffic, even though I was traveling only 7 miles. I was heading to Green Papaya Projects, a well established independent art space that has been active for over a decade and run by amazing people (Pewee and Merv). They had invited me to give an informal presentation about my recent work in Bacolod and “The People’s Island” project. You can imagine, I was both excited to share the experience and very fresh documentation but also quite nervous since it was only five days after the public launching of the project and I was still processing the intense experience…

So, after a public lecture at the Negros Museum addressing the role of Public Art in fostering community participation and healthy environments; a five-day workshop exploring collaboration; sustainable urban planning and socially engaged art, I invited participants to creatively explore their city as an extension of the endangered natural world. This is how The People’s Island became a thinking tool, a collective dream and an immersive artistic experience that engaged around 150 people through a public event and exhibition.

Framed as a large participatory art project, The People’s Island really took place in the public sphere of Bacolod: in urban spaces, natural sites and even in our collective consciousness. The project evolved slowly during three weeks of intense work, conversations exchanges with local artists, makers, students, advocates and environmentalists from Bacolod City. These encounters resulted in four community-driven art projects supported by small grants from AAI, all of which were featured during the launching of The People’s Island. This collection of creative voices made it possible for us to create a program that lasted nearly four hours and used three different locations.

Thus, on April 25th at performers and volunteers from Negros Museum and Balayan (one of the organizations that received an AAI small grant) gathered at the city’s plaza and mobilized the public to the nearby waterfront (Bay Walk). Using colorful flags, these volunteers gave form to a spontaneous parade celebrating stories of community resilience to natural disasters in the region. This parade was presented as a portable performance, which gathered the attention from passers-by and magnetized an even large number of attendees.

Once the public arrived Bay Walk, members from The Institute for Negros Development (another AAI small grant recipient) challenged attendees to design healthy meals using only paper cutouts of food and drawing materials, all while thinking on participatory methods to collect community-driven design ideas. This became an engaging activity that made us all contribute proposals for alternative meals made with local ingredients, which could address increasing levels of malnutrition in rural areas of the Philippines.

Around the sun started to descend and the entire area was suddenly covered by the orange light of a beautiful tropical sunset. This was the moment when The People’s Island started to take form as attendees gathered closer and closer around the shore. Several fishermen joined the celebration by anchoring their boats only a few meters away from the waterfront. Along with them, a 15 ft x 15ft floating raft made out of bamboo appeared in front of the audience, transporting in it a performer. This is how The Eco-Resource Floating Library (third project funded by the AAI program) made its first public appearance, delivering a performative lecture on the history of the archipelago and marine conservation. The minutes were passing and a dramatic sunset suddenly took over the sky, offering the perfect background for the closing act of this special evening.

Around , a few members from Binhi Art Collective (the fourth AAI small grant recipient) took their places on the raft. Meanwhile, other members of the group standing on the shore set up their guitars and other musical instruments. This final performance was an epic rendition of the song Hangin (English translation: Air), originally composed by Dina, a former member of the group who passed away from cancer last year. Having the instruments and voices physically separated but also coming together in the open air and open sea, gave us all the taste of a unique and sublime moment. After we all had worked so hard to enable a new encounter with our surrounding environment, this time was so powerful to renew the bond between local residents and this vast and beautiful planet. 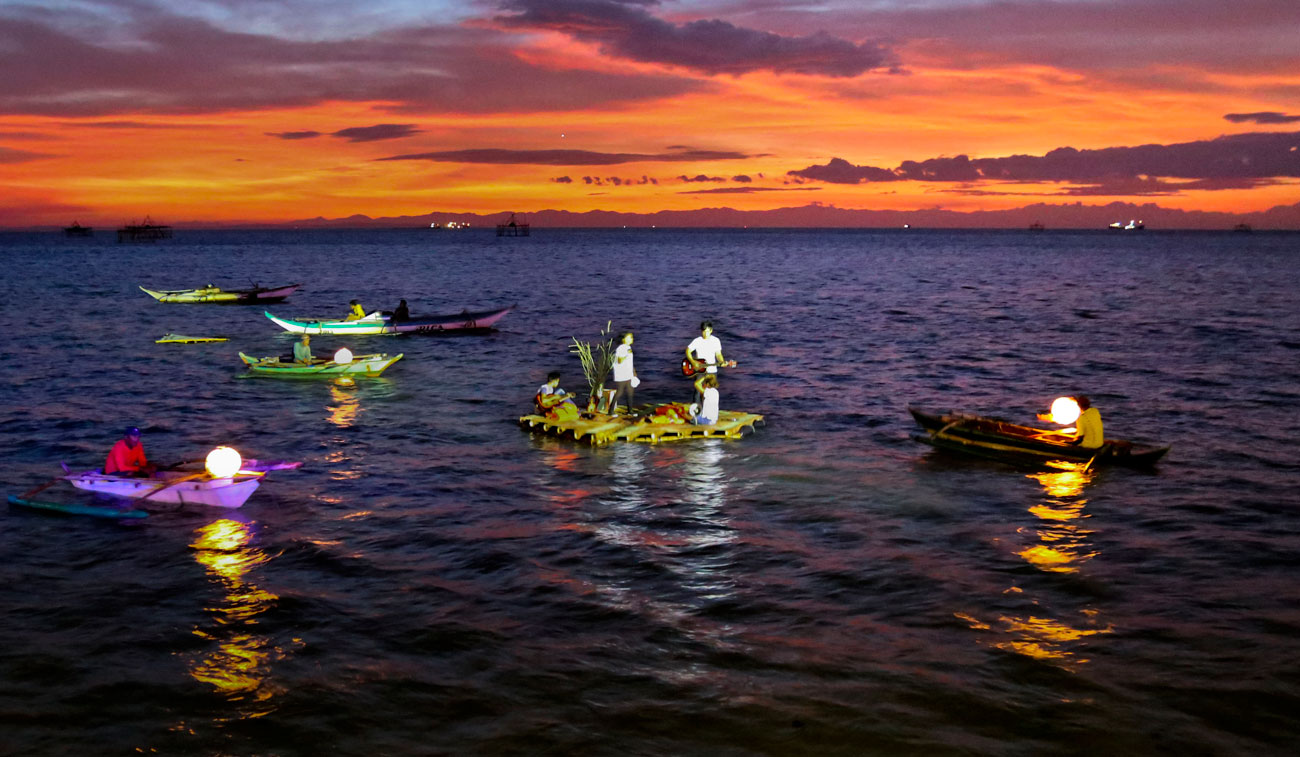 Around we reached the point where The People’s Island finally was completed and ready to start its own journey*. When the sun was disappearing behind the horizon line, people and boats gathered around this and the music and lyrics of Hangin filled the air. The bamboo rafts started to glow as they were slowly dragged further and further into the open sea… After the public launching, The People’s Island became a real place emerging within and around us. Although at times purely metaphorical, we all can agree that a new place was made real throughout this exchange and collaboration. After all, is none other than the things we do together.

*Its next destination will be Suyac Island in the Northern part of the Negros region, where the structure will re-emerge as the Floating Eco-Resource Center and Library.