Using Augmented Reality to Connect Past and Future 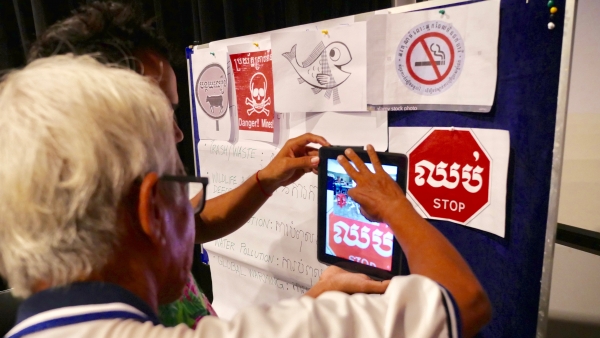 We are underway with the American Arts Incubator — Cambodia workshop at Bophana Center!

In our workshop we have done a series of exercises working with the Aurasma augmented reality app. One group of students created an “aura” that uses the image of a skull-and-crossbones landmine warning sign as a trigger for an augmented reality overlay — a video they shot of discarded plastic bottles and other trash on the street.  At first there were comments that the landmine warning was too extreme for this association with trash. But then as we discussed it, we began to wonder if future generations might look back on us with the same terror and concern. Is all this careless waste laying new treacherous mine fields for our children to cross? The documentary, A Plastic Ocean, screened at the American Corner at Paññāsāstra University of Cambodia last week revealing to us the tragic impacts of the flood of indestructible waste that pours from our consumer lifestyles.

In an effort to do our part, NRG Solutions – Kruosar Solar has completed a soft install of the components of the 260 watt solar panel, battery, and charge controller system we are donating to Bophana. We are going to hook it up and test out a variety of locations in the Bophana space, finishing the install next week. In addition, we purchased some really exciting low-power appliances from Niwa Solar to run on the power generated. There is a super bright light that only draws 3 Watts, a standing fan (13 W), 18” television monitor (8-11 W) and USB chargers. They all run directly from the 12 volts supplied by the 100 amp hour battery without the need of an inverter. We already have the components that can keep us cool, lit, and connected, bathed in electronic images and sounds! Plenty of extra power will be generated to share.   Sustainability is achieved when the power generated balances the power needs. Once that point is reached, we have caught the wave and are surfing on photons streaming from the sun.