Why You Would Poach 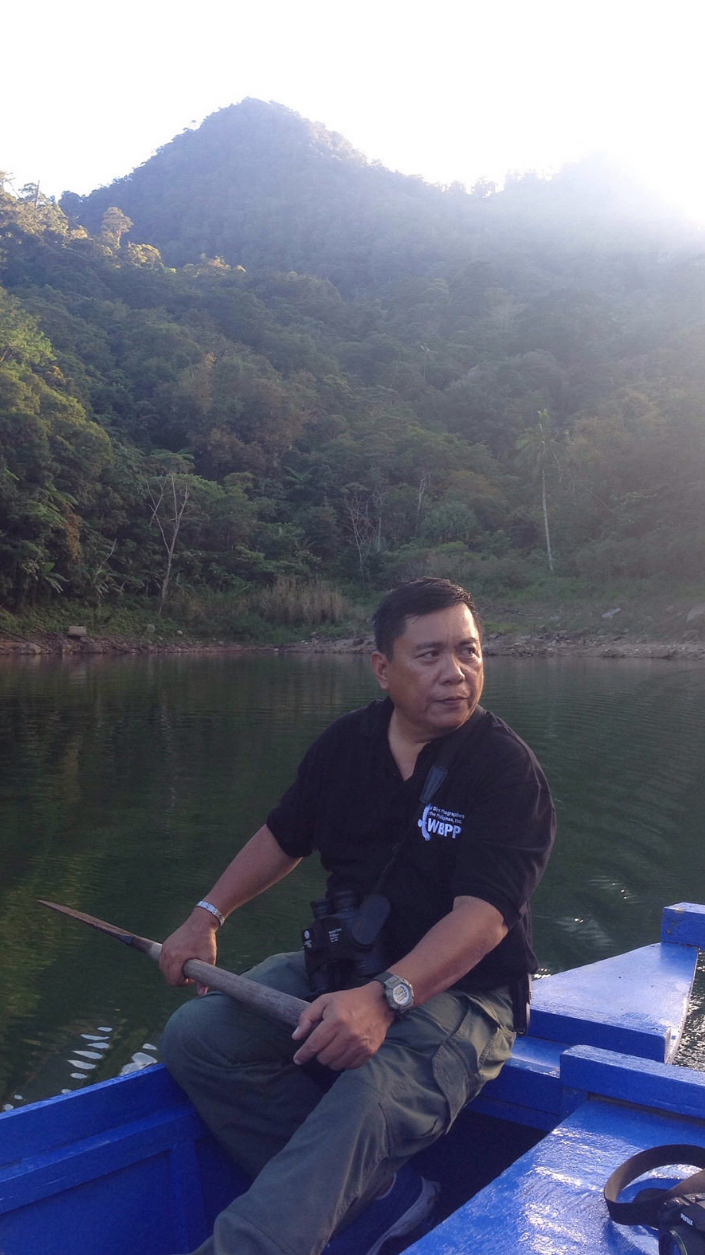 Jack, a brilliant naturalist takes us through the volcano. Photo by A. Quitmeyer.

Jack is a big dude and an equally big nerd for nature. The man is a machine-gun rattling off bullets of knowledge about everything he sees. “This bird is named Coleto, it eats insects, and has a white patch on its head- that’s why in Filipino we can call the bald people, “Hey Coleto!”

“This flower stays in bloom for six months.”

“This lake turned purple once a couple years ago because of the volcanic activity. They were worried it might release poison gas and kill everyone like at a lake that turned purple in another country.” 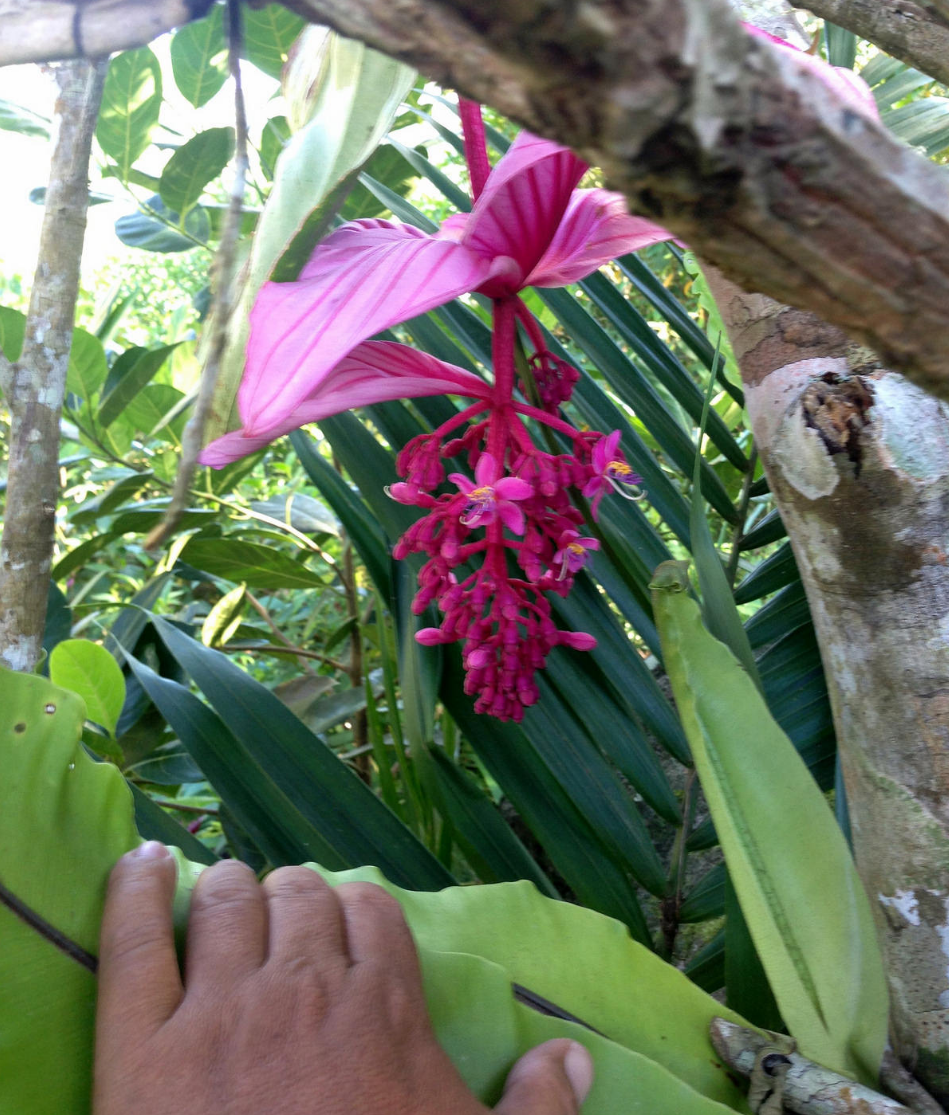 Jack is taking us on a scouting trip with Pong, our coordinator from the US Embassy. We are searching for places to build a new Art and Technology Laboratory with a focus on environmental health. He took us to a new nature preserve in a spellbinding site. Two ‘twin-lakes’ nestled against each other, perched atop a volcano, and surrounded by lush forest.

“The lake on the left of the ridge is actually 10 meters higher than the other next to it, so we know there is no hole in this narrow ridge dividing them.” The dual lakes inside the jungle volcano. Photo by A. Quitmeyer.

This amazing spot blew up 10,000 years ago. Its deep dark craters filled in with fresh water. The volcanic mound was overtaken by thick forest. Only about 10 years ago, the site was officially protected.

“It’s now illegal to pick even a single flower.”

On the drive up the mountain, we pass through fancy new real-estate developments owned by the rich, or foreigners, or just those aiming to cash in on future eco-tourism in this developing spot.

We come to a dead stop every fifty feet or so. When we met Jack at the tourism office, he laughed with us saying that if he had gone out with us, he would guarantee that we see at least 30 birds that we had never seen in our entire life (“lifers”). It turns out he was 100% serious about this. As soon as he got in the car that afternoon he said, “I thought we would be leaving much earlier… this changes my guarantee, but I think we will still get 30.” He uses his uncannily sharp eyes to pick out and identify birds on distant branches and trees. He can ID them based on just the subtlest of features. The technical birding term for this is ‘jizz’ (No, seriously, check Wikipedia). He gets the driver to constantly stop the car on our way up the mountain and slowly creep up on our prey. Checking out birds. Photo courtesy of A. Quitmeyer.

We sneak out of the car over and over again as he guides our vision with a high-powered green laser-pen. The birds are true lifers for both of us with the Embassy. Strange features, long tails, bright gaudy colors, weird songs. Looking past the birds though, one starts noticing a pattern in the distance. Featureless bald patches infecting the mountain like a flea-ridden dog. While the volcano we’re heading towards and the thin strip of road leading up to it are lush and green, the surrounding forest seem mangy. Tree poachers.

“There is a bird that is supposed to be extinct here on Negros Island, but I have seen this bird three times.”

Jack explains, “After the first two sightings, I got a cameraman to find it and get good proof with me.” We climbed up the ridge over there. Got up early, some coffee, some bread. Took all morning to get up and we waited. Suddenly we heard a strange sound, and the bird lands right behind me. It’s huge. The camera guy is all surprised and drops his camera. He picks it up to get a picture but then this other sound. CRACK. And a huge rustle of a tree falling down nearby scares it off. Tree poachers.”

It’s hard to tell where they are stealing trees. Jack explains they build cases around their chainsaws which connect to tubes that pass through big drums of water. Chainsaw silencers. That’s how they could be so close to him on the mountain-side and only be detected when the tree actually starts falling.

After missing out on this special bird, Jack went to confront these tree poachers. “I tell them that this is protected land and it’s illegal to cut down trees. Then I notice the two M16’s they have laying out, and I shut up, and just walk away.”

We go down into the crater and hop on a small catamaran. The lake is smooth and peaceful. Floating in the lake we are surrounded by a ring of wild greenery filled with hidden birds. There’s mist moving between nooks in the encompassing mountain, and everything looks like Jurassic Park. Pong and I continue our routine of sitting patiently, admiring the mist moving in and out of the trees and ridges, while Jack scans the sights and sounds for fresh birds. Scouting for birds from inside the volcano. Photo by A. Quitmeyer.

We pull up to a waterfall and Jack gets excited. There are two shirtless guys working in a clearing right next to the park’s path. “Oh wow, this is very interesting to see, these are hemp-poachers!” Jack invites himself (and us) into their clearing where long silky hairs cover a fallen log. He smiles and gets them to (obligingly) show off the tools of their craft: simple blades embedded in logs, mechanisms for shredding trees into soft fiber.

Tour of the poacher camp. Video by A. Quitmeyer.

“They come from about a day’s journey away. They hike here, camp for several days, then bring hundreds of pounds of the fiber to sell in the city. They can get about 10 times as much from this as shredding fiber in other places.” The poachers gave a quick smile pointing to how their tools worked, but their focus immediately returned to their labor. They shredded these trees, feverishly, non-stop. “On a good day, they can make 100 pounds of this material. They can sell it on the market for about 200 pesos.” This is $4 USD.

We keep walking down the path. We see the waterfall. We take pictures of it. It is pretty.

Driving back down the mountain, we pass a boy working at the gate. “You see him? His father was just killed by poachers a couple months ago.” Jack’s cheery, fast-paced demeanor drops a bit. “His father saw some people cutting down trees, so he got his radio and reported it. Actually it doesn’t matter if he actually reported it or not. People said he was the one who reported it. Well, one night the poachers came to his house and shot him. Now his son still works here at the park.” We sat and he continued, “You see it makes it very tricky to do this job. We want to protect the park and stop the poachers, but often it is too dangerous to do anything.” Leaving the park. Photo by A. Quitmeyer.

Some moments pass. We were tired from the adventure, and this final story made the sadness of this environmental destruction real. After a bit of quiet traveling, Pong tries to lighten the mood with a question, “When did you become a birder? Have you always just liked birds?” Jack responds, “No, I used to poach them.”

This took us both by surprise. “What?” Pong asks to clarify. “Yeah, I would go out on hunts and kill many of these birds I am showing you…like those hornbills we saw.”  “Why wouldn’t you just eat chicken instead of these endangered birds?” she replies, still quite puzzled by this revelation. “Oh, if I found a chicken, I wouldn’t even eat it. I could take that down to the market and sell it! I poached these birds for food. You can’t sell an endangered animal, but you can eat it if that’s all you have.” We sat there shocked for a while. He gave us a short moment for all this to sink in, and then went right ahead, matter-of-factly, into the technology behind such poaching. “You see we could get a small PVC tube, some alcohol, and some marbles for ammo, and then you would have a silent gun for hunting in protected areas.”

NOTE: I take full responsibility for butchering any of the facts, spellings, or parts of the story throughout this essay. My post is written from memory. 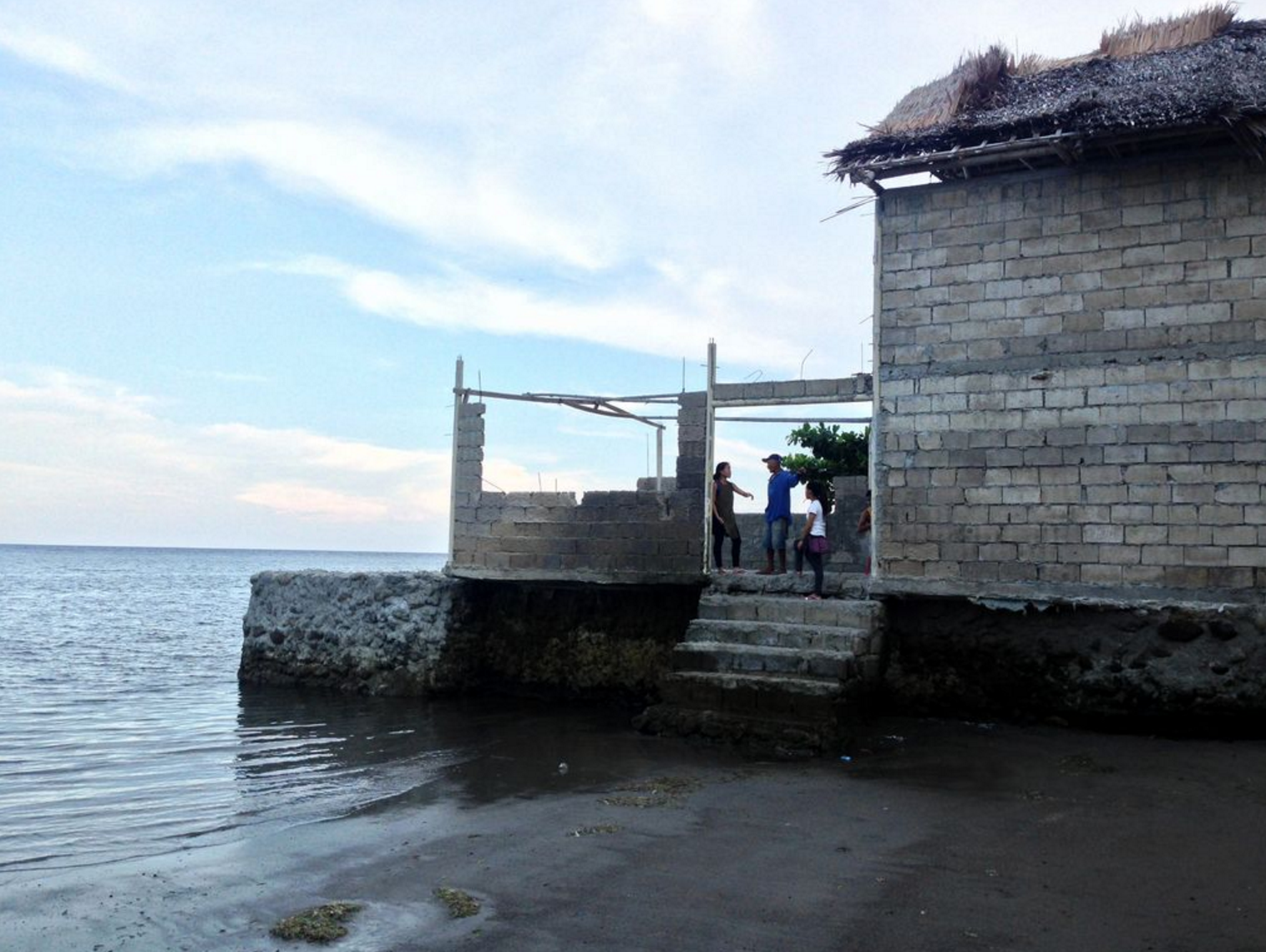 A man we interviewed discusses how the ocean is slowly surrounding his house as sea levels rise. Photo by A. Quitmeyer.

Jack had 9 children, two with severe cerebral palsy. He only stopped poaching because he was given the opportunity to use his brilliance to help protect the land and get paid for these abilities. He would have no qualms with going back to poaching if that was his only option to feed his family.

And that there is the problem. I used to think poachers were inherently evil people. Captain Planet would go fight piggish-looking villains with simple, deranged motivations like “I WANT TO CHOP DOWN ALL THE TREES!” But these were not villains. They are a result of what happens when we push people to the edges of society. They have to make decisions – choosing themselves or the environment. They aren’t normally destructive or violent unless they are pushed into it. People become animals when we make them that way. 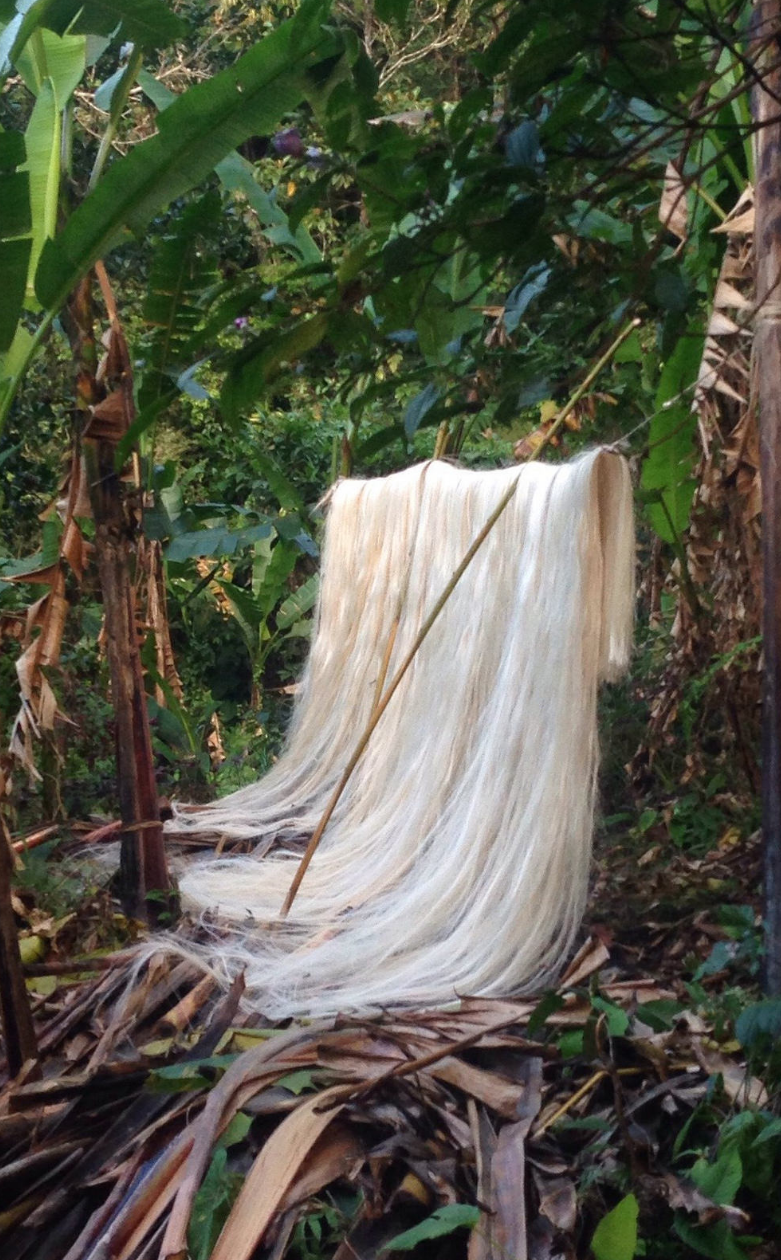 Soft, silky fiber poached from the woods. Photo by A. Quitmeyer.

The other problem is that nature dies slowly. The rest of us, having a nice time reaping the spoils of life within society, don’t get immediate feedback from the blight of a clear-cut mountaintop. We can’t feel the infinitesimal rise of the ocean, until it starts surrounding our house 20 years after burning the carbon we released into the atmosphere. Instead, we need to find ways to make people care about natural diversity for its own sake.

So there are two things we need to do: 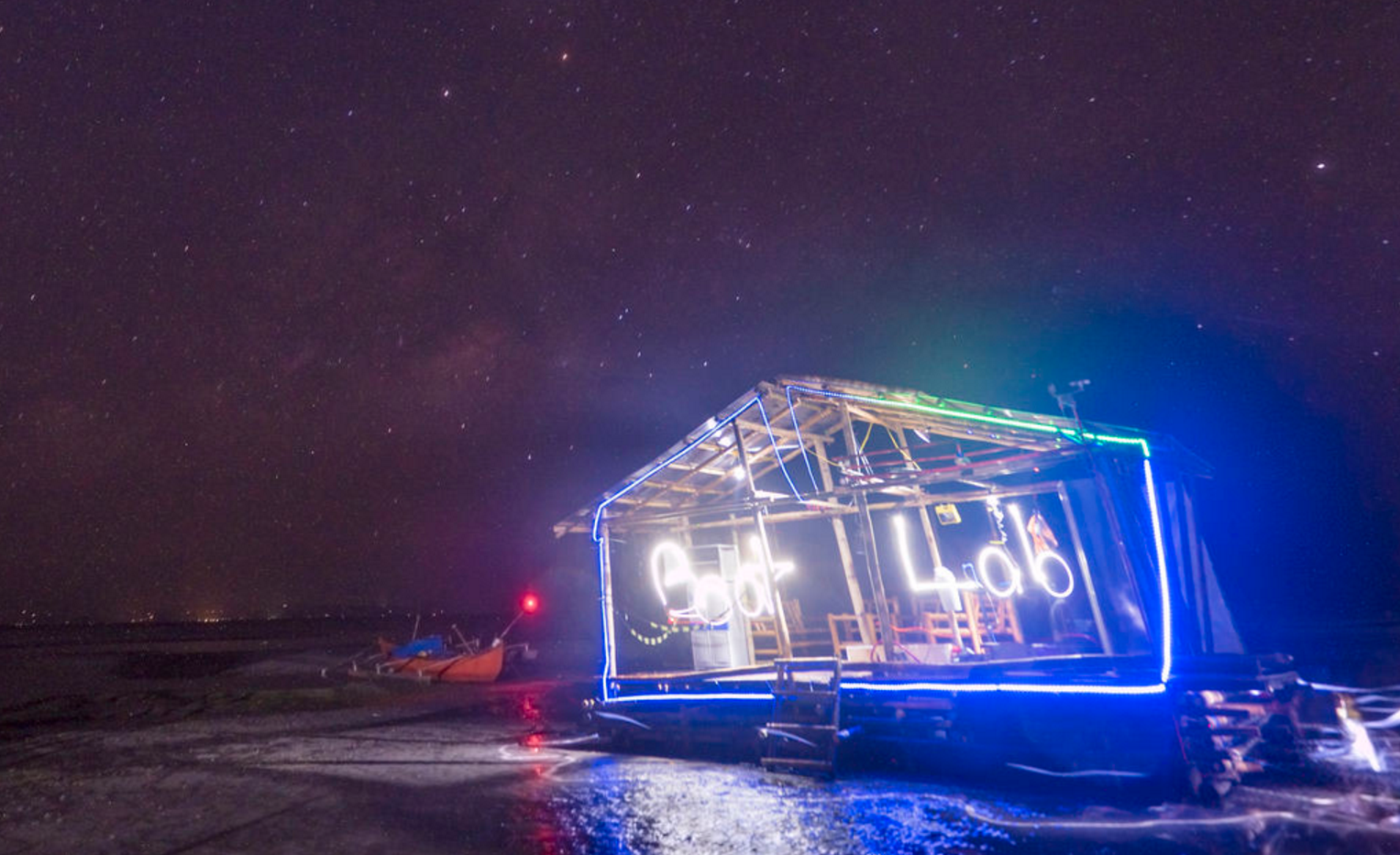 BOAT Lab and stars. Photo by A. Quitmeyer.

We are killing off our own life support system. We need to protect our environment, and the way to do that is to first protect the poor and underserved humans.

I hope the BOAT Lab is able to do this, and can shine a light on these intermeshed economic and environmental problems.